The Living Organisms -Characteristics and Habitats 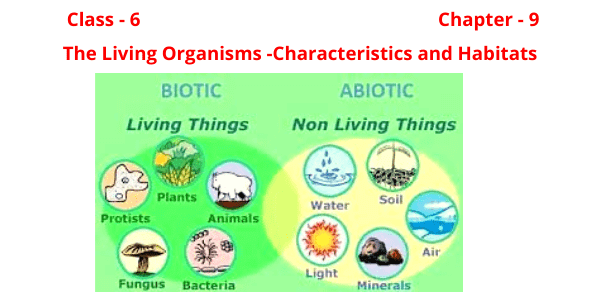 The Living Organisms -Characteristics and Habitats

The place where organisms live. It provides food, shelter, and other needs for organisms.

Biotic – All the living organisms in a habitat.
Example – Plants, animals, etc.

Abiotic – All the non-living organisms in a habitat.
Example – Rocks, soil, water, etc.

The plants and animals that live on land are said to be live in terrestrial habitats.
Eg- forests, grassland, etc.

The habitats of plants and animals that live in water.
Example – Lakes, rivers, etc.

Characteristics of the organism-

1- Plants make their own food by the process of photosynthesis while animals depend on plants or other animals for their food. Food gives the energy to grow.

2- All the organisms show growth.

3-All organism respire. When we inhale the air comes from outside to the inside of the body. When we breathe out the air moves from inside our body to outside. Breathing is a part of a process called respiration. All the organisms respire all animals some animals may have different mechanisms for the exchange of gases. Example earthworm breathe show their skin fish have gills for using oxygen dissolved in water except

4-All the egg organism no from one place to another and also show other body movements.

Answer: The place where organisms live. It provides food, shelter, and other needs for organisms.

2. How are cactus adapted to survive in a desert?

Answer: Cactus are adapted to survive in a desert as they have

(ii) Stems are modified so that it can perform photosynthesis.

(a) The presence of specific features which enable a plant or an animal to live in a particular habitat is called _______________.

4. Which of the things in the following list are non-living: Plough, Mushrooms, Sewing machine, Radio, Boat, Water, Hyacinth, Earthworm,

5. Give an example of a non-living thing that shows any two characteristics of a living thing.

Answer: Example of non-living thing is a balloon which shows the following two characteristics of living things:

(ii) It moves from one place to another.

6. Which of the following non-living things were once part of a living thing?

Answer: Some common characteristics of living things are:

-Moves from one place to another.

-It reproduces young ones

Answer: In grasslands habitats, there is less number of trees or places for animals to hide. When their enemy attacks they have to run faster so as they can protect themselves from enemies So, speed is very important for the survival of grassland animals.