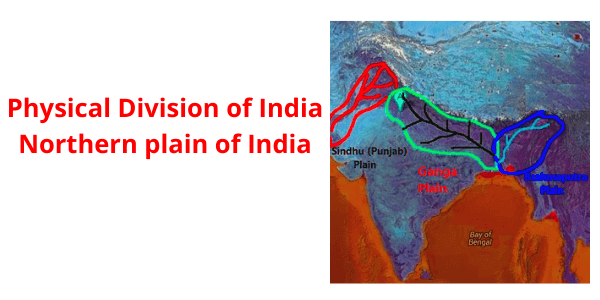 The northern plain of India is formed by the Indus, Ganga and its tributaries. Northern plain is made of alluvial soil. In millions of years, a large basin located in Giripad in the Himalayas (soil brought by alluvial rivers) has been deposited, creating this fertile plain. It is spread over an area of ​​7 lakh sq Km. The ground is approximately 2400 Km long and 240–320 Km wide. It is a densely populated geographical area. The vast plain of India is one of the most fertile and densely populated land parts of the world. The rivers coming from the northern mountains are engaged in the deposition work. The speed of the river decreases as the slope in the lower parts of the river decreases, resulting in the formation of riverine islands. These rivers get divided into many streams due to silt deposition at their bottom. These streams are called distributaries.

The northern plain is broadly divided into three sections-

The Gangetic plain extends between the Ghaggar and Teesta rivers. It is widespread in the northern states of Haryana, Delhi, Uttar Pradesh, Bihar, parts of Jharkhand and West Bengal.

It is located to the west especially in Assam. The northern plains are generally interpreted as flat sites with no diversity in its reliefs.

The geographical shapes of these wide plains also vary. The northern plains are divided into four parts, depending on soil characteristics and gradient. Can be divided.

While descending from the Himalayan rivers, the Gutika (stones and pebbles) are deposited in an 8–16 Km wide strip on the Shivalik slope. It is known as ‘Babur’.All the borders disappear in this Bhabar belt.

Extinct streams in the Bhabar belt These rivers (rivers) reappear in the south of this belt, and form a moist and marshy area known as ‘Terai’. It was a region of dense forests filled with wildlife. This forest has been cut down to provide arable land to the refugees who came from Pakistan after Partition. It is a low-level plain, where the water of rivers forms marshy areas here and there.

The largest part of the northern plain is made up of old alluvium. It is made of old alluvial soil brought by rivers. The soil of this region contains lime deposits, locally known as ‘pebbles’, which are made of calcium.

It is made from the soil brought by the rivers every year, so they are fertile and the fertility of this soil is highest. New and young deposits of flood plains are called ‘Khadar’.