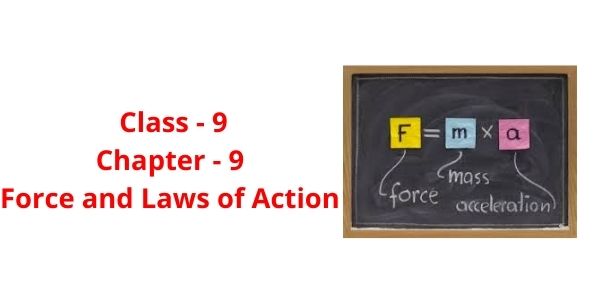 •Balanced force- When the equal magnitude of the force is applied from opposite directions on an object which in result do not allow to change the state of an object.
Example- When a person pushes the block with a small force, the box does not move because of friction (force arises between two surfaces in contact) acting in a direction opposite to the push. It balances the pulling force and block does not move.

•Unbalanced force- When the unequal magnitude of the force is applied from opposite directions on an object. So that object would begin to move in the direction of the greater force, which changes the state of an object.
Example –When a person applies force on the block, greater than the fraction. It unbalanced the pulling force and block starts moving.

•The tendency of an object to maintain its position of rest or motion is called inertia. That is why it is known as the law of inertia.

•Inertia of an object is measured by its mass.Greater the mass ,more the inertia.

Sum of momenta of the two objects before collision is equal to the sum of momentum after the collision provided there is no external unbalanced force acting on them .This is known as law of conservation of momentum.

Rate of change of object 2 before and after collision

1. Which of the following has more inertia: (a) a rubber ball and a stone of the same size? (b) a bicycle and a train? (c) a five-rupee coin and a one-rupee coin?

3. Explain why some of the leaves may get detached from a tree if we vigorously shake its branch.

Answer-When we shake the branch of a tree, the branch starts to vibrate. The vibration of the branch is resisted by the inertia of leaves. So leaves with weak attachment falls down due to inertia whereas leaves which are strongly attachment remain in it.

4. Why do you fall in the forward direction when a moving bus brakes to a stop and fall backwards when it accelerates from rest?

Answer- When moving bus applies the brake to stop, we fall in the forward direction because inertia resists the change in motion of the bus. We fall backwards when it accelerated from rest because the inertia of passenger opposes the forward motion.

1. If action is always equal to the reaction, explain how a horse can pull a cart.

Answer-A horse moving in forwarding direction applied force in backward and earth is providing opposite force in the horse which makes the horse pull a cart.

2. Explain, why is it difficult for a fireman to hold a hose, which ejects large amounts of water at a high velocity.

Answer-Force must be applied on the water to eject it with high velocity from the hose. Water apply equal and opposite force on the hose which has a high magnitude for the fireman to handle.So, it is difficult for a fireman to hold a hose.

3. From a rifle of mass 4 kg, a bullet of mass 50 g is fired with an initial velocity of 35 m s–1. Calculate the initial recoil velocity of the rifle.

4. Two objects of masses 100 g and 200 g are moving along the same line and direction with velocities of 2 ms–1 and 1 ms–1, respectively. They collide and after the collision, the first object moves at a velocity of 1.67ms–1. Determine the velocity of the second object.

1. An object experiences a net zero external unbalanced force. Is it possible for the object to be travelling with a non-zero velocity? If yes, state the conditions that must be placed on the magnitude and direction
of the velocity. If no, provide a reason.

Answer-Yes, this is possible when external unbalance force to act upon it.

2. When a carpet is beaten with a stick, dust comes out of it. Explain.

Answer-It is because stick exerts a force on a carpet in beaten and this force changes the state of motion of carpet. This change of state opposes by the inertia of dust particle. Now carpet moves in the forward direction and dust particle in opposite direction.

4. A batsman hits a cricket ball which then rolls on level ground. After covering a short distance, the ball comes to rest. The ball slows to a stop because (a) the batsman did not hit the ball hard enough. (b) velocity is proportional to the force exerted on the ball. (c) there is a force on the ball opposing the motion. (d) there is no unbalanced force on the ball, so the ball would want to come to rest.

Answer –The correct answer is (c)

6. A stone of 1 kg is thrown with a velocity of 20 ms-1 across the frozen the surface of a lake and comes to rest after travelling a distance of 50 m. What is the force of friction between the stone and the ice?

8. An automobile vehicle has a mass of 1500 kg. What must be the force between the vehicle and road if the vehicle is to be stopped with a negative acceleration of 1.7 ms-2?

10. Using a horizontal force of 200 N, we intend to move a wooden cabinet across a floor at a constant velocity. What is the friction force that will be exerted on the cabinet?

Answer-The total friction force is -200 N.As frictional force of equal magnitude and in opposite direction applied to the wooden cabinet.

11. Two objects, each of mass 1.5 kg, are moving in the same straight line but in opposite directions. The velocity of each object is 2.5 ms1 before the collision during which they stick together. What will be the velocity of the combined object after the collision?

12. According to the third law of motion when we push on an object, the object pushes back on us with an equal and opposite force. If the object is a massive truck parked along the roadside, it will probably not move. A student justifies this by answering that the two opposite and equal forces cancel each other. Comment on this logic and explain why the truck does not move.

Answer-As the mass of the truck is very large so friction between ground and truck is so high as compared to applied force so frictional force cancels it. As a result, the truck does not move. So the logic of student is correct.

13. A hockey ball of mass 200 g travelling at 10 ms−1is struck by a hockey stick so as to return it along its original path with a velocity at 5 ms−1. Calculate the magnitude of change of momentum that occurred in the motion of the hockey ball by the force applied by the hockey stick.

14. A bullet of mass 10 g travelling horizontally with a velocity of 150 ms−1 strikes a stationary wooden block and comes to rest in 0.03 s.Calculate the distance of penetration of the bullet into the block. Also, calculate the magnitude of the force exerted by the wooden block on the bullet.

15. An object of mass 1 kg travelling in a straight line with a velocity of 10 ms−1 collides with and sticks to, a stationary wooden block of mass 5kg. Then they both move off together in the same straight line. Calculate
the total momentum just before the impact and just after the impact. Also, calculate the velocity of the combined object.

16. An object of mass 100 kg is accelerated uniformly from a velocity of 5 ms−1 to 8 ms−1in 6 s. Calculate the initial and final momentum of the object. Also, find the magnitude of the force exerted on the object.

17. Akhtar, Kiran, and Rahul were riding in a motorcar that was moving with a high velocity on an expressway when an insect hit the windshield and got stuck on the windscreen. Akhtar and Kiran started pondering over the situation. Kiran suggested that the insect suffered a greater change in momentum as compared to the change in momentum of the motorcar (because the change in the velocity of the insect was much more than that of the motorcar). Akhtar said that since the motorcar was moving with larger velocity, it exerted a larger force on the insect. And as a result, the insect died. Rahul while putting an entirely new the explanation said that both the motorcar and the insect experienced the same force and a change in their momentum. Comment on these suggestions.

Answer- Kiran is correct. As a change in momentum of insects is very much lower than a change in momentum of a car since the mass of the insect is very small when compared to the mass of the car.
Akhtar Is correct. As when insect stuck in windshield or we can say they both collide with each other but the force of collision on an insect is greater in insect due to greater mass of car than insect
Rahul is incorrect as his suggestion does not follow the law of conservation of momentum.

18. How much momentum will a dumb-bell of mass 10 kg transfer to the floor if it falls from a height of 80 cm? Take its downward acceleration to be 10 m/s².

1. The following is the distance-time table of an object in motion:

(a) What conclusion can you draw about the acceleration? Is it constant, increasing, decreasing, or zero? (b) What do you infer about the forces acting on the object?

Answer-(a) The acceleration of the object is increasing.
(b) F =ma
Force is directly proportional to acceleration. Therefore force also increases.

2. Two persons manage to push a motorcar of mass 1200 kg at a uniform velocity along a level road. The same motorcar can be pushed by three persons to produce an acceleration of 0.2 m s−2. With what force
does each person push the motorcar? (Assume that all persons push the motorcar with the same muscular effort)

4-A motorcar of mass 1200 kg is moving along a straight line with a uniform velocity of 90 km/h. Its velocity is slowed down to 18 km/h in 4 s by an unbalanced external force. Calculate the acceleration and change
in momentum. Also, calculate the magnitude of the force required.