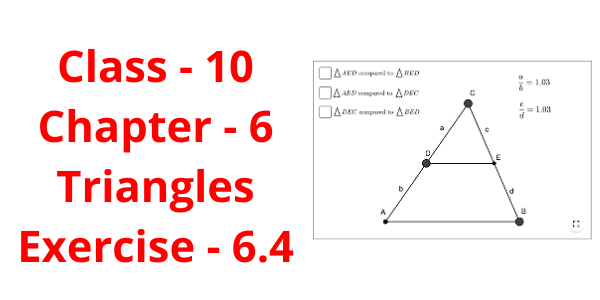 Diagonals of a trapezium ABCD with AB || DC intersect each other at the point O. If AB = 2CD, find the ratio of the areas of triangles AOB and COD. In the figure, ABC and DBC are two triangles on the same base BC. If AD intersects BC at O, show that area (ΔABC)/area (ΔDBC) = AO/DO. Let AP and DM are the perpendiculars on line BC.

If the areas of two similar triangles are equal, prove that they are congruent.

D, E and F are respectively the mid-points of sides AB, BC and CA of ΔABC. Find the ratio of the area of ΔDEF and ΔABC. F is the mid-point of AB [Given]

E is the mid-point of AC [Given]

[Opposite sides of the parallelogram are equal and parallel]

[when triangles are congruent, they are equal in the area.]

[As the areas of two similar triangles are proportional to the squares of the corresponding sides.] Hence, (C) is the correct answer.

Hence, (D) is the correct answer.