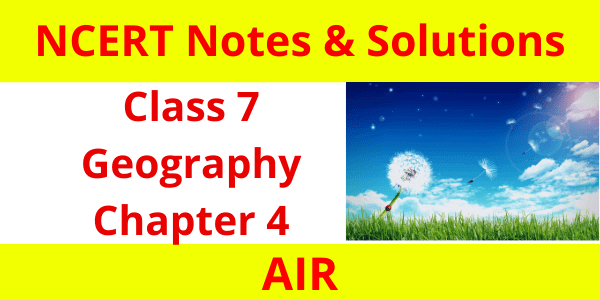 Atmosphere-  It is a blanket of air that surrounds our earth.

Composition of the atmosphere-

Earth atmosphere is made up of

Apart from these gases. It includes tiny dust particles that are present in the air.

Nitrogen –  Plants need nitrogen for their survival which they take through bacteria that are present in the soil and roots of some plants. These bacteria change nitrogen into a form that is useful for plants.

Aur Circulation –  Air on heating expands up and becomes lighter. Cool air is heavy and goes down. The cool area fills the gap of the hot area.

Structure of the atmosphere –

5 layers of the atmosphere –

Tropopause – It is paint or line from where the stratosphere starts and the troposphere ends.

(iv)Thermosphere –  With an increase in height, the temperature rises in the thermosphere.

Weather –  It is the day-to-day condition of an atmosphere.

Climate –  Average weather condition of place over a long period of time.

» Wind Vane→ Direction of the wind.

(i) What is the atmosphere?

Answer: It is a blanket of air that surrounds our earth. It protects us from harmful ultraviolet rays.

(ii) Which two gases make the bulk of the atmosphere?

(iii) Which gas creates a greenhouse effect in the atmosphere?

(iv) What is the weather?

Answer: It is the day-to-day condition of an atmosphere.

(vi) What is air pressure?

Answer: Air pressure is defined as the pressure exerted by the weight of air on the earth’s surface. The air pressure decreases as height increases and is the highest at the sea level.

(i) Which of the following gases protects us from harmful sun rays?

(ii) The most important layer of the atmosphere is

(iii) Which of the following layers of the atmosphere is free from clouds?

(iv) As we go up the layers of the atmosphere, the pressure

(v) When precipitation comes down to the earth in the liquid form, it is called

(i) Wet clothes take a longer time to dry on a humid day?

Answer: The amount of water in the air is high on humid days. Due to which the rate of evaporation decreases and the air absorb less water from the clothes.

(ii) Amount of insolation decreases from the equator towards poles?

Answer: The sun’s rays fall vertically at the equator and become oblique at the poles, which reduces the amount of disinfection from the equator toward the poles.