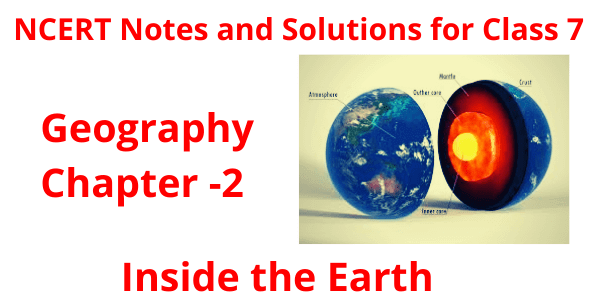 NCERT Notes and Solutions for Class 7

The earth is the only planet in the solar system in which life exists.

Interior of the Earth:

The earth has serval layers, one inside another.

The uppermost layer of the earth’s surface is called Crust. It forms only 1% of the volume of earth.

Mantle: Mantle is the layer of earth surface which is below cust. Depth of mantle is 2900km. It consists of 84% of the earth.

Core: Core is the innermost layer having a radius of about 3500 km. It is mainly made up of Nickle (ni) and Iron (Fe). It has a high temperature and pressure. 15% of the earth’s surface is made up of core.

(A) Igneous rocks- It is formed when molten magma solidified.

Weathering is a process of changing of heavy rocks into fragments.