Matter in Our Surroundings 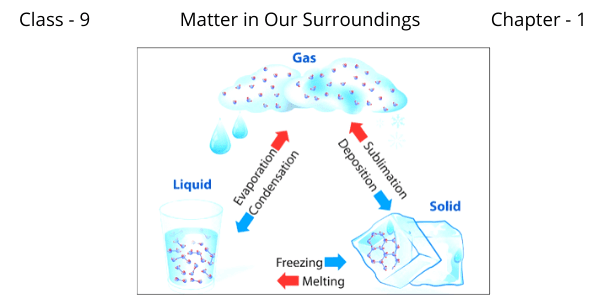 Matter in Our Surroundings

Everything in this universe is made up of material which we named as “matter”.
Example – Stars, plants, clouds, stones are all matter.
So, we can define matter as materials which occupy space and have mass.

Matters are made up of millions of tiny particles. The particles of matter are very small.

1.2 Characteristic of particles of matter –

There are three states of matter:
• The solid-state
• The liquid state
• The gases states

The Liquid state- Here are the properties of liquid state:
a) Not fixed shape
b) Fixed volume did take up the shape of the container in which they are kept not rigid.
c) Liquid flows
d) Less compressibility as particles have some space between them.
e) More intermolecular space than solid.
f) Less intermolecular force than solid.
Example – Water, petrol etc.

Note- solids, liquids and gases can diffuse into liquids.
•The rate of diffusion of liquid is higher than that of the solid because in the liquid state particles move freely and have a bigger space between each other as compared to particles in the solid-state.
• The gases from the atmosphere dissolve in water especially Oxygen and Carbon dioxide so this is the reason that all the aquatic animals can breathe underwater as oxygen is dissolved in water.

Note- The pressure exerted by the gas is because of this force exerted by gas-particle per unit area on the wall of the container.

There the three States of matter solid, liquid and gas which are interchangeable.

As the temperature of solid increases, the kinetic energy of particles also increases. It gives enough energy to particles so that they start vibrating with a greater speed which helps overcome attraction force between the particles. Particle started moving freely at the particular stage and get free to move. At this stage, solid melts into a liquid with a very low force of attraction. Now if we apply heat on the liquid then the remaining force of attraction will break totally and particles are free to move. A stage reached the temperature at which a liquid start changing into gas.

• The minimum temperature at which solid melts to become a liquid at atmospheric pressure is called its melting point. The melting point of ice is 273.15 Kelvin.

• The temperature at which liquid stars bowling and atmospheric pressure. A boiling point for water the temperature is 373 kelvin.

2-Give reasons for the following observation:
The smell of hot sizzling food reaches you several meters away, but to get the smell from cold food you have to go close.
Answer:

3-A diver is able to cut through water in a swimming pool. Which property of matter does this observation show?
Answer:

The diver is able to easily cut through the water in the swimming pool because Water is in the liquid state having a very less intermolecular attraction between them and are easily breakable.

4-What are the characteristics of the particles of matter?
Answer:

Particles of matter have the following characteristics –
(a) Presence of intermolecular spaces between particles.
(b) Particles are in continuously moving.
(c) They attract each other and we call this intermolecular force of attraction.

1. The mass per unit volume of a substance is called density. (density=mass/volume). Arrange the following in the order of increasing density – air, exhaust from the chimneys, honey, water, chalk, cotton and iron.
Answer:

2-Answer the following.
a) Tabulate the differences in the characteristics of matter.
b) Comment upon the following: rigidity, compressibility, fluidity, filling
a gas container,
shape, kinetic energy and density.
Answer:

(a) The difference in the characteristics of the three states of matter.

(b) (i) Rigidity: Property of a substance by which its shape remains fixed when treated with an external force.

(ii) Compressibility: External pressure applied to the object to contract its the intermolecular force which in turn reduce its density.

(iv) Filling the gas container: Gas has that property by which it takes the shape of the container in all possible direction.

a) A gas fills completely the vessel in which it is kept.

b) A gas exerts pressure on the walls of the container.

c) A wooden table should be called a solid.

d) We can easily move our hand in the air but to do the same through a solid block of wood we need a karate expert.

(a) Gas has the least intermolecular force so molecules of a gas move in all possible directions.

(b) Due to high kinetic energy, molecules of gases hit the walls of the container as well as with other gas molecules which exerts pressure.

(c) This is because the table has a rigid shape and a definite volume.

(d) Because the intermolecular force is very less in the air so they are least dense and it is easy to break the bond whereas, it is hard to move hand through a solid block of wood because the molecules are closely packed so they are very dense and bonds are not easily breakable.

4-Liquids generally have a lower density than solids. But you must have observed that ice floats on water. Find out why.
Answer:

Ice is solid but the density of ice is less than the density of water. The molecules in ice make a cage-like structure with a lot of vacant spaces, this makes ice float on water.

1-Convert the following temperature to Celsius scale:
a. 300K b. 573K
Answer:

3-For any substance, why does the temperature remain constant during the change of state?
Answer:

This is because Changes of state are neither exothermic nor endothermic that means there is no absorb or release of heat because the heat energy which is provided to change the state, is all used up to break the intermolecular force between molecules.

Atmospheric gases are liquefied by increasing the pressure so that molecules of gases come closer and reached the state when they get liquefied.

1-Why does a desert cooler cool better on a hot dry day?
Answer:

2-How does the water kept in an earthen pot (matka) become cool during summer?
Answer:

The earthen pot contains many porous and when we put water in it then the heat inside it used up to convert water into vapours because of the process of evaporation. This causes the cooling effect and keeps water cool.

3-Why does our palm feel cold when we put on some acetone or petrol or perfume on it?
Answer:

when we put acetone, petrol and perfume on our palm, it absorbs heat from our body and gets vaporized which causes cooling effect and we feel cold.

4-Why are we able to sip hot tea or milk faster from a saucer rather than a cup?
Answer:

5-What type of clothes should we wear in summer?
Answer:

It is preferred to wear light-coloured cotton clothes in summer because light colour clothes do not absorb heat and absorb sweat which on evaporation keeps our skin cool.

3-Give reason for the following observations:
(a) Naphthalene balls disappear with time without leaving any solid.
Answer:

Naphthalene balls are in solid-state. At room temperature, balls started to convert directly into vapours due to the process of sublimation
(solid-state directly converts to the gaseous state.) and disappear with time without leaving any solid.

(b) We can get the smell of perfume while sitting several metres away.
Answer:

4-Arrange the following in increasing order of forces of attraction between the particles – water, sugar, oxygen.
Answer:

Increasing order of forces of attraction between the particles –
Oxygen < water < sugar.

(b) An iron almirah is a solid as it has fixed volume and rigid shape at room temperature.

7. Why is ice at 273 K more effective in cooling than water at the same temperature?
Answer:

Ice is more effective in cooling than water at 273 K because of the extra heat (Latent heat )which ice absorb from the medium and water do not have this property of absorption of latent heat.

9. Name A, B, C, D, E and F in the following diagram showing change in its state.