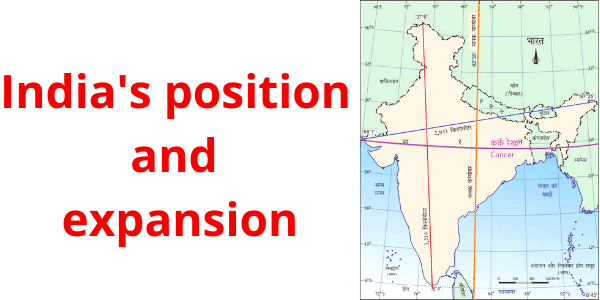 The shape of India-

The total area of ​​the territory of India is about 32.8 lakh square kilometers. India’s area is 2.4 % of the total geographical area of ​​the world, which is the seventh-largest country in the world. India’s landline is about 15200 Km and the coastline is 7516.6 Km along with the Andaman and Nicobar Islands and Lakshadweep group.

India and The World-

The Indian plots lie between the east and west of the Asia continent. Indian territory is the southernmost extension of the continent of Asia. The Indian Ocean which joins European countries and East Asian countries in the West gives India a central position. The plateau to the south extends headlong into the Indian Ocean and has close links with countries in West Asia, Africa and Europe, as well as countries in East Asia, through the East Coast. The coastal border of any country in the Indian Ocean is not like India. Due to this very important position of India, an ocean (Indian Ocean) is named after it.

There is a difference of two hours in the local time from Gujarat to Arunachal Pradesh, so the longitude line 82 ° 30 ′ east is considered to be the standard meteorological point of India which passes through Mirzapur in Uttar Pradesh. Latitude affects the period from day to night, from south to north.

India’s land borders with Pakistan and Afghanistan in the northwest, China (Tibet), Nepal and Bhutan in the north and Myanmar and Bangladesh in the east.