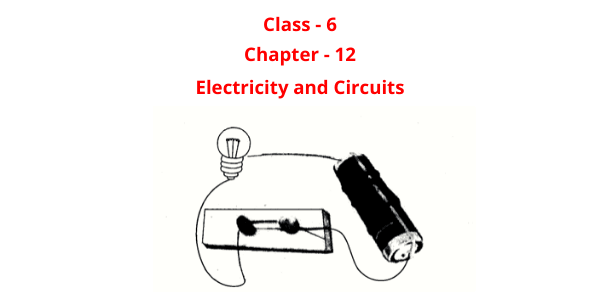 The systematic arrangement of electric components such as resistors, capacitor, bulb and switch which are connected with each other by conducting wire so that electric current can flow through it.

An electric bulb may fuse due to many reasons, one reason for a bulb to fuse is a break in its filament. A break in filament means a break in the path of the current between the terminals of the electric cell. Therefore, a fused bulb does not light up as no current passes through its filament.

A switch is a simple device that either breaks the circuit or completes it.

2. Mark ‘True’ or ‘False’ for the following statements:

(a) Electric current can flow through metals.

(b) Instead of metal wires, a jute string can be used to make a circuit.

(c) Electric current can pass through a sheet of thermocol.

3.Explain why the bulb would not glow in the arrangement shown in fig As tester has two terminals, one is made up of metal and the other side is made up of plastic. In the above arrangement, the bulb will not glow because the circuit is incomplete as plastic is an insulator that does not allow current to pass through it.

4. Complete the drawing shown in Fig. 12.9 to indicate where the free ends of the two wires should be joined to make the bulb glow. 5. What is the purpose of using an electric switch? Name some electrical gadgets that have switches built into them.

Electric switch either breaks the circuit or complete the circuit that means it used to make electric circuit close or open. Television, washing machine, cooler are some electrical gadgets that have switches built into them.

6. Would the bulb glow after completing the circuit shown in Fig. 12.9 if instead of safety pin we use an eraser?

No, the bulb will not glow if we use an eraser instead of a safety pin as an eraser is an insulator so current will not flow through it. 8. Using the “conduction tester” on an object it was found that the bulb begins to glow. Is that object a conductor or an insulator? Explain.

On using the “conduction tester ”on an object it was found that the bulb begins to glow because the tester is a good conductor of electricity, so tester allows current to pass through it.

9. Why should an electrician use rubber gloves while repairing an electric switch at your home? Explain.

An electrician uses rubber gloves while repairing an electric switch because rubber is an insulator so current will not flow through it to the body of the electrician to harm him.

10. The handles of the tools like screwdrivers and pliers used by electricians for repair work usually have plastic or rubber covers on them. Can you explain why?

As plastic or rubber is an insulator which does not allow an electric current to pass through them. Screwdrivers and pliers have plastic or rubber covers so that the current will not pass when electricians come in contact with current-carrying wires and will not meet with any kind of accident.