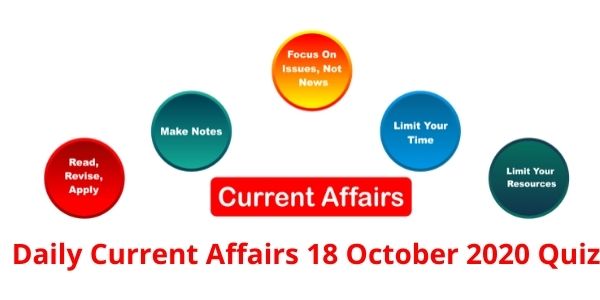 Q1. The central government has announced that it will borrow ___________under the special GST window to meet the revenue shortfall on account of implementing the Goods and Services Tax (GST) compensation.
(a) Rs 1.7 lakh crore
(b) Rs 1.5 lakh crore
(c) Rs 1.9 lakh crore
(d) Rs 1.1 lakh crore

Q4. Who has been appointed by the Supreme Court to head the one-man monitoring committee to look into the issue of curb burning in the states of Punjab, Haryana and Uttar Pradesh?
(a) Dipak Misra
(b) Madan B Lokur
(c) Ranjan Gogoi
(d) Arjan Kumar Sikri

Q5. The senior Janata Dal (United) leader Kapil Deo Kamat, who was serving as the Panchayati Raj Minister of ___________, has passed away due to COVID-19.
(a) Rajasthan
(b) Madhya Pradesh
(c) Kerala
(d)Bihar

Q6. _____________ Lieutenant Governor, Manoj Sinha has announced that the government is coming up with a movement called ”My Town My Pride”
(a) Ladakh
(b) Jammu and Kashmir
(c) Chandigarh
(d) Delhi

Q7.International Day for the Eradication of Poverty 2020 theme?
(a) Answering the Call of October 17 to end poverty: A path toward peaceful and inclusive societies
(b) Coming together with those furthest behind to build an inclusive world of universal respect for human rights and dignity
(c) Acting Together to Empower Children, their Families and Communities to End Poverty
(d) Acting together to achieve social and environmental justice for all

Q9. ____________ appointed as the next Permanent Representative of India to the Permanent Delegation of India to United Nations Educational, Scientific and Cultural Organization (UNESCO), with the rank of Ambassador?
(a) A K Singh Somvanshi
(b) Pradeep Kumar
(c) Vishal V. Sharma
(d) Manju Gupta
(e) Santosh Kumar Misra

Q10. _________has been appointed as the Interim President of the International Weightlifting Federation(IWF)?

Q11.Which of the following countries has been ranked 58th in the list of ‘Passport Index 2020 of Action Capital’?
(a) China
(b) Nepal
(c) India
(d) Russia

Q12.____________ state government has decided to set up a Farmers Welfare Fund Board for upgrading farmers?
(a) Kerala
(b) Karnataka
(c) Punjab
(d) Madhya Pradesh