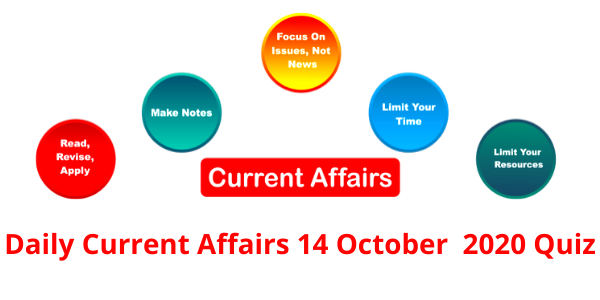 Q1.Tree transplant policy is approved by which state government?

Q4. Which state became the first state in the country to have a fully digital high-tech classroom?

a. Gold
b. Silver
c. Bronze
d. None of the Above

Q7. What percentage of India’s growth rate has been estimated by the World Bank for the current financial year?

Q9. ‘Total’ an energy company has announced to buy 37.4 percent stake in Adani Gas?‘Total’  company belongs to which country?

Q10. Which international organization has recently published a report about labour rights violations in tea gardens of an Indian state?

Q11. India has been ranked in the Inequality Reduction Commitment Index released by ‘Oxfam International’?

Q12. Which country has topped the 2020 Commitment to Reducing Inequality (CRI) Index?

Q14. Under the Leave Travel Concession (LTC) Cash Voucher Schemes announced by the Finance Ministry, employees will get the entitled fare as cash vouchers, which they can spend on any purchasing up to_____________.

Q15. Carlton Chapman, who passed away recently played which of the following sports?

Q16. Prince William of Britain and naturalist David Attenborough have launched a new prize “______________” aimed at encouraging change and support for the repair of the planet.

Q18.Which of the following countries has the lowest ranking of 158th in the Reduction Inequality (CRI) index?