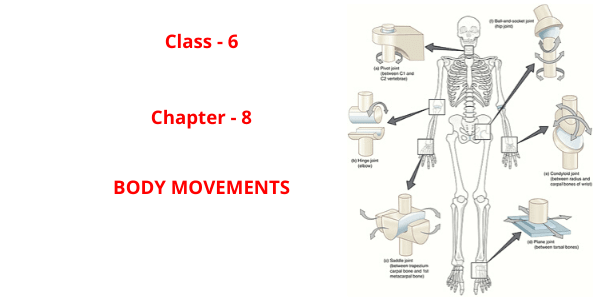 Places where two parts of our body seem to be joined together.

There are different types of joints in our body that help in carrying out different movements and activities. Some of them are：

All the bones in our body form a framework to give a shape to our body, this framework is called the skeleton.

Fingers are made up of several small bones called carples.

Responsible for the movement of the human body. When contracted, the muscles become shorter, stiffer, and thicker.

The body of an earthworm is made up of many rings joined end to end. It does not have bones. Earthworm first extends the front part of the body, then it fixes the part and releases the rear end.

It carries a rounded structure at its back, this is called the shell. A thick structure and the head of the snail may come out of an opening. The structure of the foot made of strong muscles.

The body is covered with a harr outer skeleton .outer skeleton is made of the number of plates joined together and that permits movement.

The head and tail of the fish are smaller than the middle portion of the body, this body shape is called streamlined. The shape allows the fish to move in the water.

How do snakes move?

2. Indicate ‘true’ and false’ among the following sentences:

(a) The movement and locomotion of all animals are exactly the same.

(b) The cartilages are harder than bones.

(c) The finger bones do not have joints.

(d) The forearm has two bones.

(e) Cockroaches have an outer skeleton.

(g) have a streamlined body.

(a) What are a ball and socket joint?
Ans: The joint in which part of the shoulder joined with arms. Such a joint allows movement in all directions.

(b) Which of the skull bones is movable?
Ans: Only lower jaws are movable.

(c) Why can our elbow not move backward?
Ans: Because the elbow has a hinge joint that allows movement in one direction only.