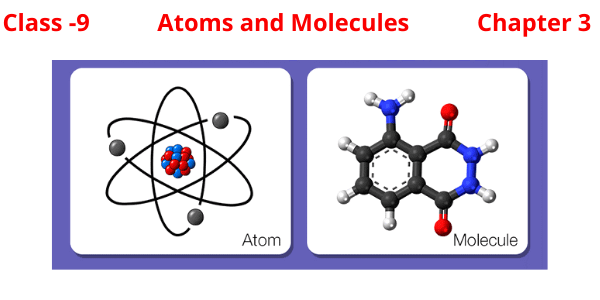 Given by -Antoine L. Lavoisier and Joseph L. Proust

1- Law of conservation of mass –“Mass can neither be created nor destroyed in a chemical reaction.”
2- Law of constant proportion- “In a chemical substance the elements are always present in definite proportions by mass”.

All matter is composed of small particles called atoms.

Postulates-
• All matter is made up of very tiny particles called atom which take part in a chemical reaction•
• Atoms cannot be created nor destroyed in a chemical reaction.
• Atoms of a given element are identical in mass and chemical properties.
• Atoms of different elements have different mass and chemical properties.
• Atoms combine in the ratio of the small whole number to form compounds.
• The relative number of atoms and kind of atoms are constant in a given compound.

•Building blocks of all matter are atoms.
•Atoms do not exist independently, they combine together to form molecules.
•Atoms are very smaller in size having an atomic radius in nanometres.
1 nm or 1 x 10-9m
1m =109 nm
•Atomic radius of hydrogen =10–1.

•SYMBOL OF ELEMENTS- Dalton was the first scientist to use the symbol for elements. Later Berzelius suggested that the symbol of the element should be made from one or two letters of the name of elements. Now, IUPAC ( International union of pure and applied chemistry) approves name, symbols and units of elements.

•ATOMIC MASS- One atomic mass unit is a mass unit equal to exactly one -twelfth the mass of one atom of carbon-12.

•Group of two or more atoms that are chemically combined together by a strong attractive force.

Example-Carbon di-es of which metals and non-metals formed which compose compounds.

•Valency- Combining the power of an element. This will represent the capacity of combining atoms of one element with that of other elements to form a chemical compound.

-Balancing of charges of ions.
-In the case of combining metal and non- metal, we must write the symbol of metal first.

Example-  sodium chloride-sodium(Na) is metal so written first in its chemical formula is NaCl.
-The compound formed with polyatomic ions, number of Ions present in the compound is shown by enclosing the formula of ion in a bracket and write the number of ion outside the packet.
Example- Mg (OH)2 It is the sum of atomic masses of all the atoms in a molecule.

The molecular mass of water H2O

It is the sum of atomic masses of all the atoms in a formula unit of a compound. The only difference from the molecular masses that substance is taken whose constituent particles are ions.
Example- NaCl – 23+35.5=58.5 u

•1 mole is defined as a quantity in number having a mass equal to its atomic a molar mass in grams.
• Number of particles in 1 mole of any substance is equal to 6.022 × 1023 This is Avogadro constant shown given by Italian scientist Amedeo Avogadro.
• The word Mole was introduced first by William Ostwald world who drive the term from the Latin word “moles” having meaning ‘heap or pile’.

1. In a reaction, 5.3g of sodium carbonate reacted with 6 g of acetic acid. The products were 2.2 g of carbon dioxide, 0.9 g water and 8.2 g of sodium acetate. Show that these observations are in agreement with the law of conservation of mass.

2. Hydrogen and oxygen combine in the ratio of 1:8 by mass to form water. What mass of oxygen gas would be required to react completely with 3 g of hydrogen gas?

The ratio of hydrogen and oxygen=1:8

3. Which postulate of Dalton’s atomic theory is the result of the law of conservation of mass?

Dalton’s atomic theory says “Atoms can neither be created nor destroyed”.

4. Which postulate of Dalton’s atomic theory can explain the law of definite proportions?

The number of atoms and kind of atoms is equal in given compounds.

Answer:
One atomic mass unit is a mass unit equal to exactly one -twelfth the mass of one atom of carbon-12

2-Why is it not possible to see an atom with naked eyes?

Atoms are very small having an atomic radius in nanometer so they are not visible with naked eyes.

1. Write down the formulae of

2. Write down the names of compounds represented by the following formulae:

3. What is meant by the term chemical formula?

Answer:
The chemical formula of a compound represents its constituent elements and number of atoms of each combining elements.

4. How many atoms are present in a

(i) H2S molecule and

The molecular mass of

1. If one mole of carbon atoms weighs 12grams, what is the mass (in grams) of 1 atom of carbon?

1 mole of carbon weighs =12g
Mass of 1 atom =mass of one mole of an atom/Avogadro no.

1. A 0.24g sample of a compound of oxygen and boron was found by analysis to contain 0.096g of boron and 0.144g of oxygen. Calculate the percentage composition of the compound by weight.

This law proves that law of constant proportion.

3. What are polyatomic ions? Give examples Polyatomic ions are the set of two or more ions which behaves like a single unit but the net charge is not equal to zero.

Those ions that contain more than one atom but they behave as a single unit is known as Polyatomic ions.

4. Write the chemical formula of the following.

5. Give the names of the elements present in the following compounds.

6. Calculate the molar mass of the following substances.

10. Calculate the number of molecules of sulphur (S8) present in 16g of solid sulphur.

Answer:
Number of moles = mass given/ molar mass of sulphur

11. Calculate the number of aluminium ions present in 0.051g ofaluminium oxide.
(Hint: The mass of an ion is the same as that of an atom of the same element. Atomic mass of Al = 27u)